A person in North Carolina injured by the “negligence” of another is entitled to recover damages from the negligent party (i.e. “tortfeasor”). The law of negligence is a broad area, that encompasses automobile accidents, legal (lawyer) malpractice, other forms of professional negligence (e.g. legal malpractice), wrongful death, and dog bite cases. “Negligence” is generally defined as the failure to exercise “due care,” or “reasonable care,” and is predominately governed by “common law” in North Carolina. There are also statutes addressing particular types of negligence cases, such as medical malpractice actions, product liability actions, and actions arising from equestrian events. 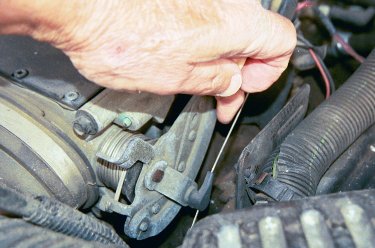 A person injured by the negligence of another person is entitled to recover damages to compensate him for bodily injury and property damage. Proving negligence can be a simple matter, or it can require expert testimony. The plaintiff (i.e. the injured person) must also prove that the defendant’s negligence “caused” the plaintiff’s losses. In the photo to the right, an expert examines the engine of a car to determine if the acceleration system failed. 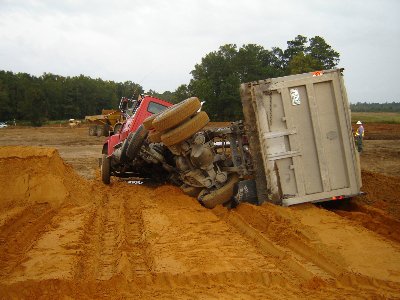 In the photo to the left, a dump truck has turned over at a construction site in North Carolina. The general contractor failed to maintain a safe worksite for the persons operating dump trucks at the site. As a result, the bed of this dump truck, which was independently owned and operated, fell at the job site and sustained significant damage. Fortunately, no one sustained any bodily injury. The owner of the dump truck needed compensation for the damage to the truck and for the loss of revenue generated by the dump truck. The contractor refused to settle, and a suit was filed. The dispute was ultimately tried before a jury in Wake County, North Carolina in 2010. The jury returned a verdict for the owner of the dump truck for approximately $75,000, after finding that the contractor was negligent and that the dump truck operator was not negligent. John Kirby represented the plaintiff (dump truck operator) in this action. This or similar results cannot be guaranteed in other cases. Further disclaimers as to results are available on this site.

John Kirby has represented parties in hundreds of claims and lawsuits based on the alleged negligence of the defendant. These cases and claims include the following claims: